The video games offered by Netflix have exceeded the 13 million download mark. This is revealed, on June 16, by data compiled by Sensor Tower, a company specializing in the economy of applications. For the moment, only 24 games make up the catalog of the streaming platform, but Netflix does not intend to stop there. The video-on-demand giant plans to double that number by the end of the year .

Take advantage of the enthusiasm around its licenses

Launched in November 2021, Netflix’s video game offer attracts new people every day. Accessible at no additional cost with a subscription to the platform, the games are all available on iOS and Android. Some of them, like Moonlighter or Hextech Mayem can nevertheless be purchased individually on PC and consoles.

According to Sensor Tower , Netflix’s games have over 1 million downloads per month with a record set at 2.3 million downloads in December 2021. This coincides with the release of the streaming leader’s second most popular game. : Asphalt Xtreme .

To attract a large audience, Netflix is ​​surfing on the enthusiasm around its licenses. Video games based on Stranger Things such as Stranger Things 1984 and Stranger Things 3: The Game are among the most downloaded titles with 2 million and 1.5 million downloads. In addition, the release of season 4 of the series made these figures soar. Between the week of May 20-26 and the week of May 27-June 2, the number of people who installed these games increased by 162% and 201% respectively. 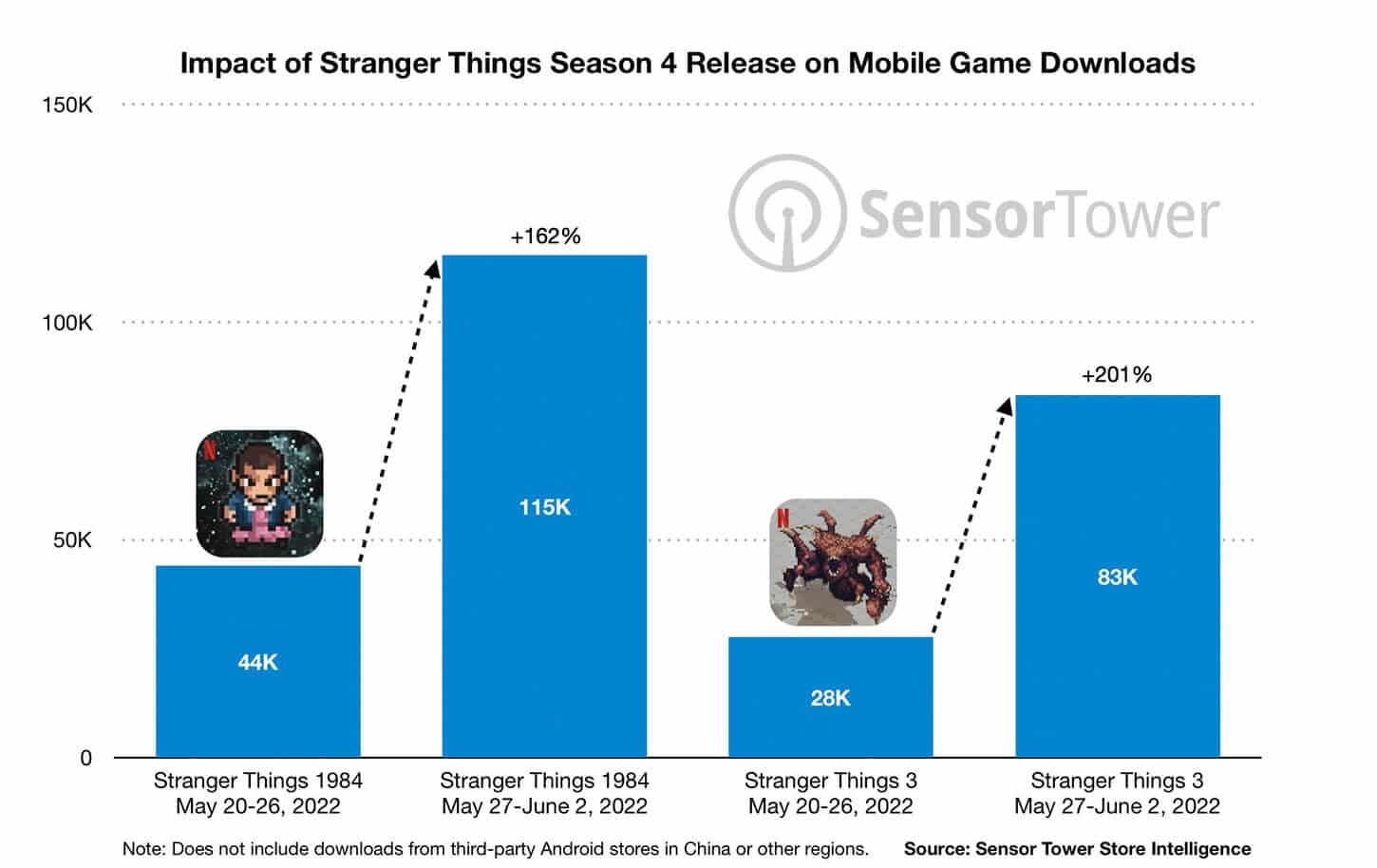 The number of downloads has increased significantly since the release of Season 4 of Stranger Things on May 27. Picture: Sensor Tower.

Netflix does not hesitate to invest

In order to expand and improve its offer, the SVOD platform has made several acquisitions in the video game sector. Its first acquisition, in September 2021, was development studio Night School , best known for its thriller Oxenfree . The latter has been downloaded more than 2.1 million times and has generated nearly $1.8 million through microtransactions.

In March 2022, Netflix bought Next Games for 60 million dollars . A logical purchase since it is the studio behind mobile games already linked to the giant’s franchises. Among them, a puzzle game in the universe of Stranger Things , Stranger Things: Puzzle Tales , the RPG Blade Runner: Rogue , but especially the juggernaut The Walking Dead: Our World . Straight inspired by the famous zombie license, this game has recorded 29.4 million downloads and generated $128.4 million in revenue. A considerable sum for a mobile game.

With the emergence of strong competitors in the presence of Disney+, HBO Max and Amazon Prime Video, Netflix is ​​looking to stand out by diversifying its services. However, if for the moment the figures for mobile games are rather good, there is no guarantee that they will be enough to catch up with the crisis that the company is going through. In its first quarter 2022 results , it reported a loss of 200,000 subscribers. Recently, due to slowing growth, Netflix was forced to lay off 150 of its employees .

Discover Deepware : How to analyze and detect deepfake videos

Brevy : How to collaborate remotely on the same website and to obtain feedback